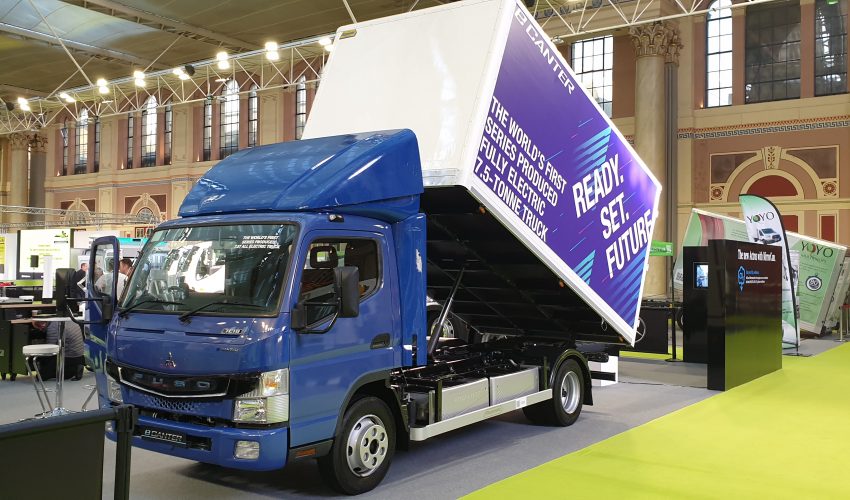 Aerodynamics is the study of the motion of air, particularly when affected by a solid object, such as a trucks’ trailer. Or put more simply, it is the airs resistance to an object moving through it. Simple enough to understand, but what does it have to do with electric trucks and the transporting of goods?

The amount of work a truck must do to reduce drag creates a serious drain on fuel economy. Therefore, the faster a truck goes, the greater the effect.

However, this is where our team of experts provide the solutions to not only make it easier for your drivers but more cost effective to utilise road haulage. Our research and development team have decades of experience with aerodynamics and the effects on trucks, so we know that the Air Management Kits (AMKs) they have developed are top of the line.

Typically, you hear of AMKs being fitted to diesel trucks to improve fuel usage. It works in much the same concept when it comes to an electric vehicle. Let us look at the Fuso eCanter as an example… The eCanter is a 7.5 tonner which we can assume has a box body. Approximate dimension for this could be 2.4m (W) x 3.2m (H). The model shown at the IAA has a battery capacity of 70Kwh. We can assume a drag coefficient of 0.9 for this example. We will use a gross weight of 6.5 tonnes. This is because in practice many trucks decrease in load as the day progresses. Given these figures, the eCanter needs 22.99Kw of power to achieve a steady 30mph on a level road. This means that at a steady 30mph the eCanters range would be 91.32 miles.

Introduction of an air kit like this can reduce the drag by around 25% on such a truck. Given a 25% reduction in drag, the eCanter would require 20.23Kw to achieve a steady speed of 30mph. This means that energy is saved, and range is increased by 13.6%, which equates to an impressive extra 12.46 miles. These statistics clearly show that improving aerodynamics can bring significant benefits to electric trucks, as well as diesel trucks.

But why the focus on electric trucks and AMKs? With Britain’s target of zero greenhouse emissions by 2050, and the phasing out of all new petrol and diesel engine vehicles by 2040, electric trucks are going to become more common place in the heavy transportation scene sooner rather than later.

For climate change, this is an important issue. Around 7% of global carbon emissions are generated by heavy transportation trucks. And while many major manufacturers are making strides in this area, there are critics that argue there will be a struggle to be cost-competitive when compared to diesel counterparts.

The exciting news though, is that the Department of Transport have recently announced £20million of funding to help support the development and uptake of electric powered heavy haulage trucks.

Transport secretary Grant Shapps said: “Through our bold and ambitious transport decarbonisation plan, we’re leading the way in the transition to zero emission vehicles by becoming the first country in the world to commit to ending the sale of all new fossil-fueled road vehicles by 2040.”

We’re excited to be contributing to these aims with our developments in AMKs. Aerodyne, like the UK Government, aim to be the exception and the example rather than the follower. Our products are the cutting edge of the aerodynamic technology available for the trucks and trailers within the UK. If you need more information then contact our offices on 01778 422 000 or email sales@aerodyneuk.com for drawings, prices, and technical information.